“In regards to dating, even in general, I’m probably at this point the most unmarketable man out there. I live with my dad. I make monster vore fetish videos. I make as much money doing these videos as I do working across the street as a janitor.”

All due respect to R.P. Whalen, but southeastern Wisconsin’s number one vorarephiliac is only half right in his self-assessment. Yes, he does live with his father in Waukesha, and surely his homespun erotica featuring women getting devoured by giant monsters is limited to but the smallest of niche audiences. Unmarketable, though? Hardly. Vore King, which is set to wrap the MidWest WeirdFest this weekend in Eau Claire, is not a documentary for everyone, but that’s what you get with a “cinematic celebration of all things fantastic, frightening, offbeat, and just plain weird.”

Vorarephilia is the sexual desire to either eat or watch another person be eaten. Fortunately,” vore” enthusiasts have plenty of legal outlets for getting their rocks off in games, manga, and videos, and it’s this last market where Whalen is one of the bigger purveyors of vornography. His “La Vore Girl” series features scantily-clad women being slowly (and often, playfully) eaten by foam creatures played by Whalen himself.

Once one gets past the initial shock of watching a purple burrito-fish swallowing a bound woman whole, Vore King glides along on the complex relationship between its subject and its director, Dan Schneidkraut. Schneidkraut, who operates out of the Twin Cities now, considers Whalen a friend. Through archival footage and bizarrely flat narration, we’re treated to his storied fascination with the man, first meeting Whalen years ago as the disdainful host of a live variety program in Minneapolis and tracing his work through public access appearances and a directorial credit under Lloyd Kaufman’s Troma Entertainment. Decades later, Whalen seems completely at ease with being a documentary subject, rifling through old erotic sketches and forays into punk music. At one point, he indulges in a minutes-long tangent about first discovering internet pornography, defending his fetish for women with glasses by outing Dan’s affinity as well.

Schneidkraut’s fondness for Whalen is complicated, especially given that the 40-something “Vore King” still has the personality of a forgotten middle child. One moment, Whalen is goose-stepping across the lawn with a World War II-era gas mask. The next, he’s choking up about his mother’s battle with cancer. When returning to Minnesota between shoots, Schneidkraut would leave his camera equipment with Whalen in Wisconsin in the hopes of inspiring his friend to make something in his absence. He does. One of Whalen’s creations features a puppet surrogate of Schneidkraut, whom Whalen interviews on-camera about a fake movie puppet-Dan fake-directed. Whalen makes that fake-movie, too.

Vore King is a cerebral and honest look at one man’s distaste for banality. The cruel irony of R.P. Whalen, “Vore King of Waukesha,” he’s now prisoner to that same passive-aggression and suburban depression he claims to despise. A trip to Las Vegas finds Whalen scouting talent for another vore shoot but not before touring the town for the requisite photo opps. Who could turn down an Elvis impersonator? 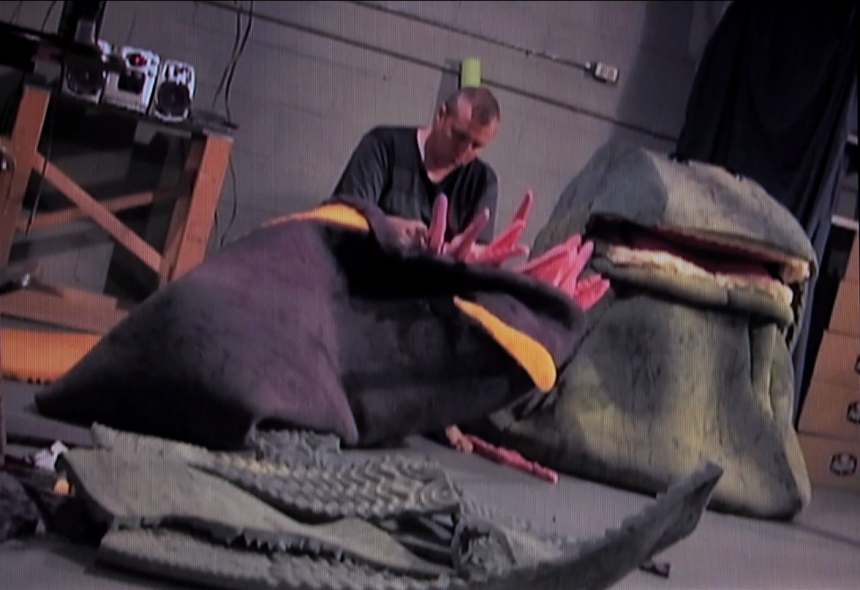 The MidWest WeirdFest makes its inaugural run at Micon Cinemas and includes other horror selections like Gags the Clown and Don’t Cry Papa. Danny Villanueva’s exercise in sanity finds a hysterical man (J. Anthony Ramos) delivering an impassioned plea to a doll in the middle of the woods, and the twist it pulls toys with audience sympathies up until the bitter end.

A festival of this caliber wouldn’t be complete without aliens, too. Quinn Else applies early X-Files aesthetics to a central Wisconsin town’s history with abductions in UFO Days. As true believer Stuart in The Trap, Tony Janning regales a skeptical friend about a device he’s rigged up to catch the lifeforms responsible for crop circles and cattle mutilations. There’s also The Dundee Project, which cracks a beer with the conspiracy wonks and martian enthusiasts attending the UFO Daze gathering in Fond du Lac. It’s also the most recent directorial effort from Mark Borchardt, who hasn’t directed a film since Coven.