“It’s funny because one local Green Bay news station was our initial goal. If just one of the local stations ran the story, that would be huge. And here they were reporting it in Iceland!”

At midnight on Aug 2, a new page popped up on Facebook. Titled “Gags – the Green Bay Clown,” the page fittingly changed its profile picture to a grainy photo of a clown standing at the intersection of Mason and Adams Street. The photo had no caption, although little affectation was needed beyond the clown’s vacant gaze and a fistful of black balloons. 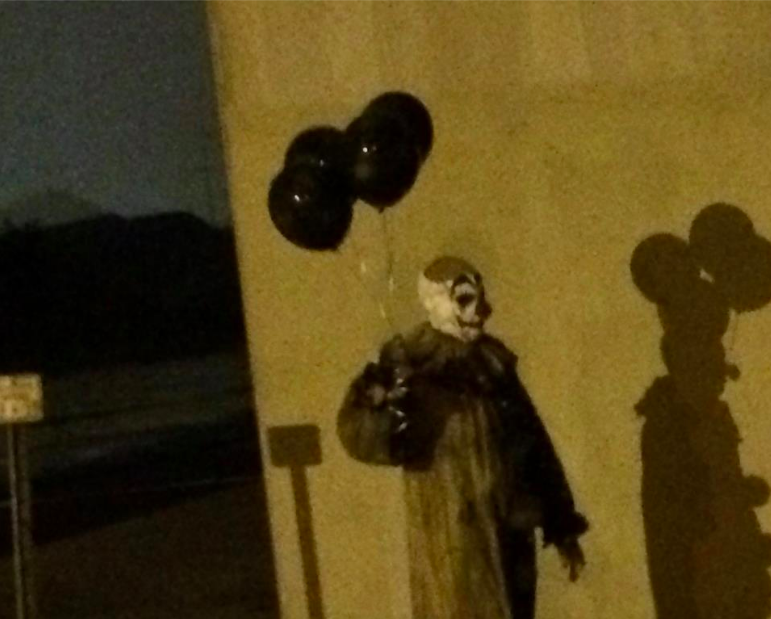 A half hour later, the page published its first post. Labeled “first sighting – aug. 1st @ 2am,” “Gags — the Green Bay Clown” released five photos from the same intersection. Word spread quickly. Some added stories in the comments about reports from frightened babysitters while others conducted impromptu psychiatry sessions. “Who seriously does this thou[sic]?” After a few hundred shares of the photoset, Green Bay’s NBC affiliate ran a story on Gags. Death threats eventually caused the Green Bay Police Department to take to social media, defending Gags’s right to freely roam the streets at night —  however messed up that right may be.

A second sighting followed on Aug 5. Then another on Aug 6. Accordingly, fan interest steamrolled. First, Gags turned up in a fan-made “video” for the Goo Goo Dolls’ “Black Balloon.” Then in Prisma artwork and Pokemon Go. At least one fan floated his theory about Gags’s connection to Aliens. Gags even found himself the subject of a since-removed missed connection on Craiglist. Gags made his fourth appearance in a mysterious Instagram post on Aug 8.

Then, a week after the first sighting, Adam Krause came clean.

As numerous outlets — WBAY, Green Bay Press Gazette, Chicagoist, USA Today, etc. — have already reported, there isn’t some wicked “phantom clown” haunting the streets of Green Bay. Sure, somebody still donned a clown suit in the wee hours of the night. But this was all part of a rapturous publicity stunt for Krause’s new project.

A publicity stunt that worked, by the way. If sexual entreaties to clowns weren’t enough of a sign that Gags (now a short film) has become a full-fledged phenomenon, consider the numbers. The Gags Facebook page managed to rack up a staggering 50,000 “likes” in less than two weeks, with coverage from Danish, French, and German outlets.

In addition to giving Krause a captive audience for production updates before an early Oct release, Gags the Clown’s Facebook page has remained strong as fans continue channeling their enthusiasm. Visitors can find presidential endorsements, Packers jerseys, “Angry Michael Phelps Face” mashups, t-shirt designs, and a new tongue-in-cheek pitch for Travel Wisconsin. Most notably, there are now a rash of interviews with Krause.

We were all too happy to add to the coulrophobic dogpile, asking Krause a few questions over email about the most exciting marketing ploy we’ve ever seen:

Your Facebook page has over 50,000 likes now. Where did the idea for “hiding” the movie side of things come from?

The idea for the movie was spawned from real-world headlines of people who dressed up like clowns and roamed city streets at night. And in pretty much every situation, people found out about these crazy-clown antics with pictures and articles that spread through social media. It happened with both the Wasco Clown and the Staten Island Clown, among many others.

Seeing how that was the inspiration for my film, I knew from the start that I wanted to try and convince the City of Green Bay that the clown phenomenon had reached our small football-loving city as a means of marketing the film. But if a bunch of people knew that I was making a new horror flick that dealt with a really creepy clown, the gig would have been up pretty quick. So I hid the movie as best as I could.

Do you have a rough sense of page growth over the last few weeks?

Well, in 12 days the page has received over 51,000 likes so I know it’s pretty impressive. But the page was created at the right time. As with all things “viral,” this will be a hot topic for a short period of time and then everyone will move on to the next thing. And the page was started at the height of the viral craze. But overall, the support and attention have been incredible. We have garnered a ton of people who are legitimately interested in seeing our movie, which was the intention all along.

There seems to have been quite a range of Gags coverage.

I have been sent stories from hundreds of cities in the United States as well as numerous articles from other countries. Spain, Ireland, Germany, and Australia all had news stories that covered Gags the Clown, among many others. It was unreal. It’s funny because one local Green Bay news station was our initial goal. If just one of the local stations ran the story, that would be huge. And here they were reporting it in Iceland!

How soon into the production process did you think to approach marketing this way?

The universe that exists in my movie is the universe that I actually created in the real world the first week the pics went viral. My characters are a group of 20-somethings that go out one night in Green Bay during a city-wide buzz thanks to this Gags the Clown character that has been spotted numerous times around town. Everyone is talking about it. Some people are entertained by it, others are terrified by it. Everyone is wondering what his motive is, who he is, etc.

Because of this, I thought it would be a really cool idea to actually create that city-wide buzz about the clown. And again, this is based on real-life stories and I knew the idea of a roaming clown could easily go viral. So before I even finished writing the script, I knew I wanted to try and pull it off and took as many precautions as I could to ensure that it could happen.

When you first revealed that Gags would be for a movie, what was the reaction on Facebook?

I actually couldn’t believe how many people were angry that there really wasn’t an evil clown walking around Green Bay. I thought I’d be providing everyone with a giant sigh of relief and instead people were like, “Boo! We want Gags to be real!” But I guess that mindset helps explain this roaming-clown phenomenon. This sort of thing really interests people.

Obviously there were quite a few people that were angry for whatever reason. Maybe they felt betrayed or annoyed that they fell for the hoax. Whatever the case may be, we’ve had and continue to have our fair share of internet trolls. But our supporters have always outnumbered the haters, as you can see with the page’s total likes.

But for the most part, people have been incredibly supportive. They’ve given credit to the marketing campaign, complimented the trailer and have continued to support the movie. Many aspiring filmmakers have reached out to me and thanked me for the inspiration, which is something that means more to me than I can properly describe here.