Cut from the same dystopian parchment as Orwell’s Animal Farm (1945) and Nineteen Eighty-Four (1949), The Lobster is part of the tradition of the absurdist allegory. It just happens to be reflecting on systemic problems of communication and compassion in the age of dating compatibility algorithms and hook-up apps. Imagine the mordant, surrealistic visions of Peter Greenaway retelling Renoir’s Rules of the Game (1939), pushing beyond the original commentary on social classes to surprising thoughts of speciesism and ethical coexistence with our fellow mammals. Director Yorgos Lanthimos’ Cannes sensation, a now-vital entry in the Greek Weird Wave, will be presented three times by WUD Film at the Marquee Cinema this weekend (Sept 2 and 3 at 7:00p, and Sept 4 at 6:00p). If the filmmaking is ultimately a little too clinical in all its twisted metaphors to visibly rise above its rule-enforced overcast, Lanthimos’ ambition nonetheless proves to be a provocative accomplishment in the realm of narrative cinema.

The muted palette and visual design may not initially impress one looking for high-budget science fiction, but The Lobster‘s atmosphere and high-concept are so assuredly, almost hypnotically, autocratic. From the first shots of a vehicle speeding down a stretch of highway, a deadpan absence of individualism is pitched at an unnerving decibel level; and it sustains as the film splits in half, with the former at the capacious hotel counting down to doom, and the latter in the boundlessness of the woods. Through the experiences of the recently separated David (a bespectacled, pedestrian-looking Colin Farrell), single residents of a faceless city are forcibly rounded up like cattle and escorted to a remote location where they are stripped of personal attire before other lonely hearts. If the bachelors and bachelorettes fail to find a life mate at the conclusion of a mandated forty-five-day period, they are transformed by hotel staff into a “lesser” species of their choosing (as per sexuality survey) and released into the surrounding wilderness. 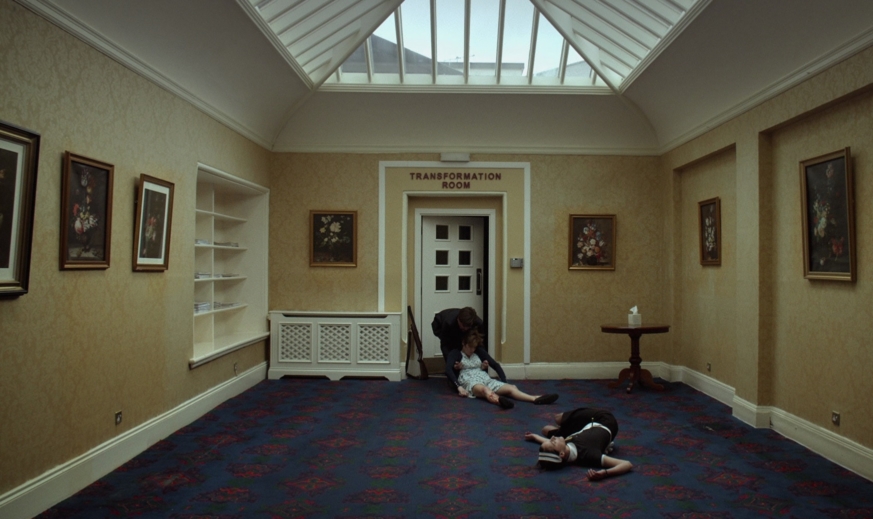 In its former delineation, the film leads its denizens (and audiences) to believe in a fundamental difference between the lives of couples and loners; yet, the reality is that each micro-society, whether confined or “liberated,” operates by a firm and largely identical set of fascistic stipulations. In the woods, the poncho-wearing leader of the loners (Léa Seydoux) forbids romance. When David makes his escape from certain institutional retribution but is suddenly drawn to the film’s narrator, the forest-dwelling short-sighted woman (Rachel Weisz), they must develop a code of silent touch to express all emotion. Of course, the irony is thick; David flees the punishment of animal transformation in the hotel only to be reduced to a more elemental, speechless subsistence outside. Throughout, Lanthimos’ point of view and tone are injected with a wickedly enthralling dark comedy in examining dysfunctional systems that refuse to be acknowledged as futile and subsequently dismantled. As it’s been said, people are sheep. In many gestures, the director and his co-writer Efthymis Filippou, urge modern audiences to embrace their biology and humanity before we all may find ourselves literally blinded into cosmic loneliness by oppression.

These themes are ingeniously multifaceted, particularly in the infrequent but thoughtful framing of animals on-screen. (for a production entitled The Lobster, anyway.) When David arrives at the hotel with a pet dog, he casually tells hotel staff that it is (and not “once was”) his brother. Within all the deranged etiquette lessons and other onerous decrees, Lanthimos’ attention to this seemingly peripheral detail becomes most relevant once David tries to pair up with the heartless woman (Angeliki Papoulia) to save himself from existence as a lobster. (Oh, but we thought he was so keen on the crustacean’s fertility!) Another hotel resident in an adjacent room (Ben Whishaw) walks with a limp after surviving a wolf attack; as he laconically explains, this was the result of attempting to find his mother who had been transformed into a canid. Rifles and other hunting-for-sport imagery further equate the metaphorical and literal hunting of animals with the hunting of ourselves. It’s likely no accident that Lanthimos cares to consider any act of violence, whether a malevolent scheme devised by the leader of the loners or the simple trapping of a small mammal like a rabbit (a proxy for any one of them/us), as a cannibalistic insinuation and aggression against our own preservation.