Perhaps a proper measure of the influence of arist-writer Roland Topor and director René Laloux’s head-trip Fantastic Planet [La planète sauvage] is not in terms of its relevance in global experimental animation, but surprisingly, the American popular music canon. Los Angeles-based alternative/space rock outfit Failure encapsulate their love for the 1973 film by adopting its title for their final ’90s record, Fantastic Planet (1996), which features a series of songs and segues that reference everything from the psychology of Tarkovsky’s classic Solaris (1972), the candid intimations of drug use, to yearning for cosmic exploration (in their most satisfying and confessional ode to space travel, which even seems to imitate the animated film’s tracking-collar sound effects in its opening seconds). 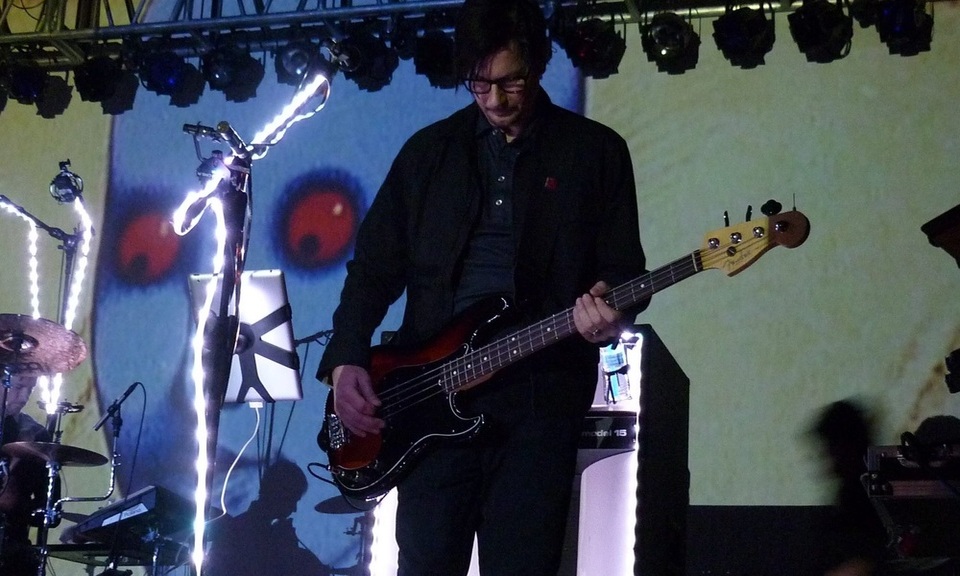 Failure opening their reunion tour set at The Rave in Milwaukee on May 24, 2014

Long before Topor and Laloux’s psychedelic sci-fi/fantasy odyssey became more widely available via Facets/Criterion disc releases, Failure could claim credit for piquing the interest of an unassuming and wide-ranging fanbase (including this particular writer). But their own assimilation is not to divert any appeal away from the film’s own Serge Gainsbourg- and Pink Floyd-inspired spacey jazz-funk sound design, composed by Alain Goraguer, which makes it feel so perfectly suited to viewing on the cusp of summer season and all the possibilities for eccentric adventure. Thankfully, the programmers at Madison Museum of Contemporary Art’s Rooftop Cinema series (at 227 State St) recognize the same, as they’ll open their 2017 calendar and 12th season on Jun 2 with a projection screening at dusk (around 9:30p). The screening is free for MMoCA members and $7 for the rest of us.

While the finished feature is adapted from French writer Stefan Wul’s 1957 text, Oms Linked Together [Oms en série], which takes some proportional scale from Jonathan Swift’s Gulliver’s Travels of the 18th century, the impressions of the production are more assuredly linked to its rigid, yet eye-popping cut-out stop-motion style of animation, grotesque creature designs, and colorful desert landscapes. Collectively, they recall the surrealist art of Salvador Dali as much as Miyazaki’s Nausicaä of the Valley of the Wind (1984), Terry Gilliam’s work in Monty Python’s Flying Circus (1969-1974), 1920s silhouette animation pioneer Lotte Reiniger, and lanky, lithe characters draped in ostentatiously futuristic clothing in Peter Chung’s Æon Flux (1991-1995). 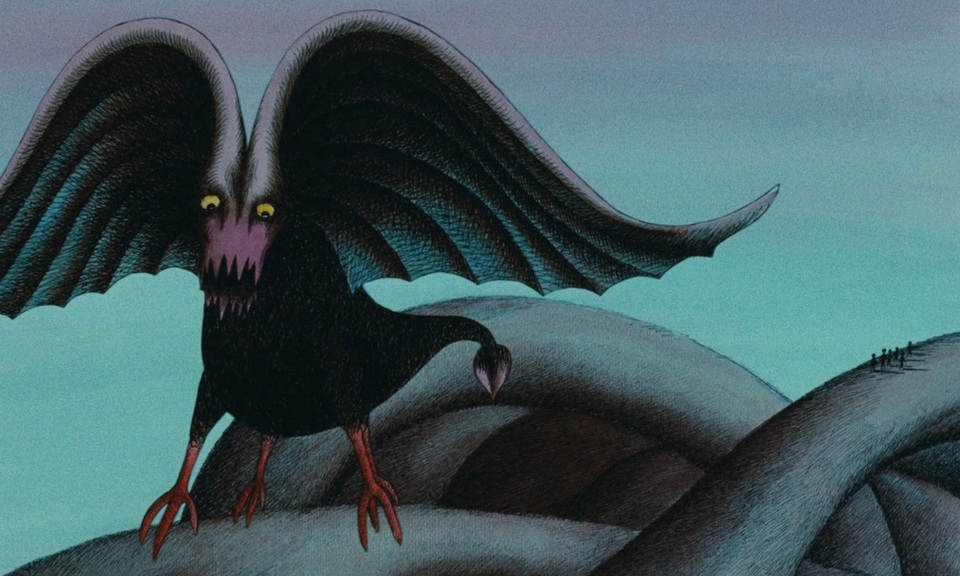 Fortunately, the strength of its allegorical themes is matched by its conceptual ambitions. In a distant future on the planet of Ygam, the native Draags, blue bug-eyed amphibious-looking colossi, have brought the comparably diminutive Oms (or humans) to their “advanced” civilization. Yet the Draags’ actions and attitudes towards the Oms are unequivocally abusive, as one Om named Terr narrates for us in past tense. An immediate moral scenario arises, as the film asks viewers to surrender their egos to reconsider our place in an ecological hierarchy and how we could be regarded as nuisances to another’s civilization, stomped upon like insignificant pests to physiologically evolved, telepathic life forms. May we reconsider our own attitudes towards environmental harmony and the animal kingdom? In the way The Lobster (2015) prods us to consider animal rights in its stark hunting analogies, Fantastic Planet similarly looks at the Draags fear-based rule, their forms of enslavement, and the Oms’ eventual revolt, altogether condemning cycles of violence in relation to false notions of superiority or speciesism.

All the innately-driving inspiration behind Fantastic Planet occasionally feels like it couldn’t be contained or coherently channeled into the narrative execution, as the filmmakers seem to favor short, fragmented scenes (perhaps for practical reasons). Contrary to the often hypnotic legato of Alain Goraguer’s trippy music, the rhythm of the film’s editing is rather staccato. Still, simply to acknowledge this feeling of a stitched-together feature is to ignore the sum of the film’s multifaceted story, thought-provoking technical innovations, and ’60s counter-cultural ideologies (that, for one, rail against the Soviet occupation of Czechoslovakia), which have endured radical changes in cinematic landscape of the last 45 years.